See some of the ways that MAXtrax has helped businesses with their tracking and safety needs.

In most cases, companies are looking for very straight forward solutions to track their equipment but every once and a while, someone needs something a little more unique. They might need a solution that produces a specific result but has a more challenging work environment.

This was the case when Absolute AG Rentals approached us and asked if we could track some of their Agricultural Equipment. The question:

Some of the Specific Results they were looking for were to:

Some of the Challenges we had with creating this solution were:

In the end, the solution was not overly complicated.  With a little bit of programming and using the right tracking device in combination with the Feature Set of the MAXtrax Software we were able create a solution that is producing some fantastic results for the client.

We used a typical tracking device that we would use for trailer tracking.  It’s a CalAmp Device with many programmable options.

As seen in this image, the device provides reporting that clearly defines when and where the equipment has been working and slightly different reporting when equipment is being transported from one site to another. 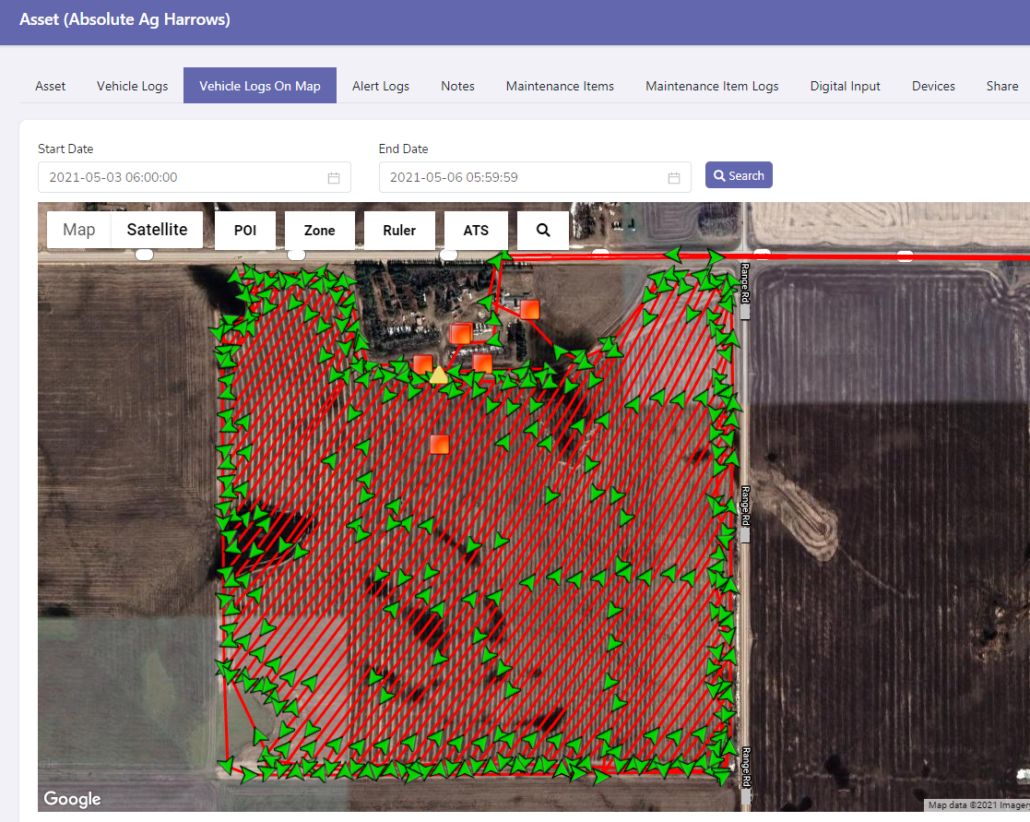 When it came time to measure how much farm land the Equipment had worked we used the MAXtrax Ruler feature to size things up. 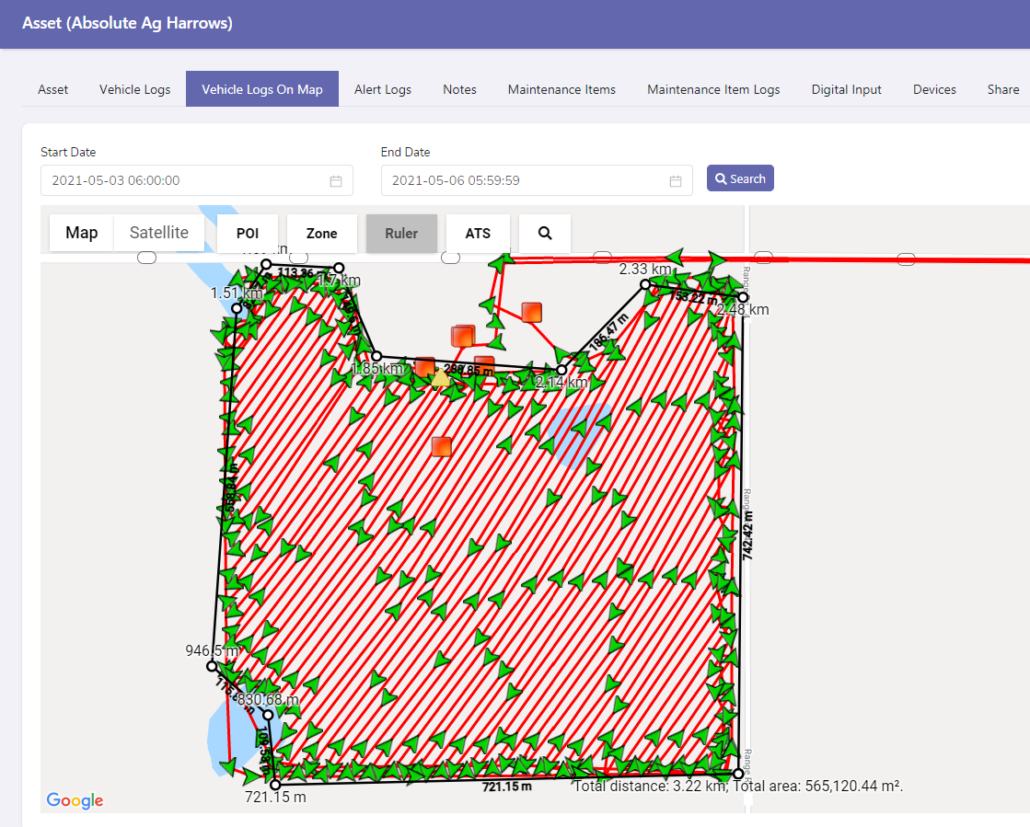 MAXtrax offers many other features and tools to help your business become more efficient.  With the right device programmed for optimal results and the features of MAXtrax, we can build just about any solution.  Whether you’re looking for typical tracking solutions or a customized one, don’t hesitate to contact us and see if we can get you the results you’re looking for.

We want to thank Absolute AG Rentals for the opportunity to build this solution for them and we look forward to improving it as we continue to innovate.

The company is large, the work site is remote, and the product is heavy.

Obviously, GPS tracking can help any company become more efficient, but sometimes the solution to create even a little more efficiency is unique and requires a new approach. Standard General, an Alberta company, working in the construction and materials production industry since 1969, has been running a major project for several years now. The project includes the production and transportation of aggregate material from a site close to a major railway line. The aggregate is extracted at site, loaded into rail cars and transported to other locations where it is used for various applications. The company wanted a way to notify the site crew that the train was almost on-site so that they could be ready when it arrived. 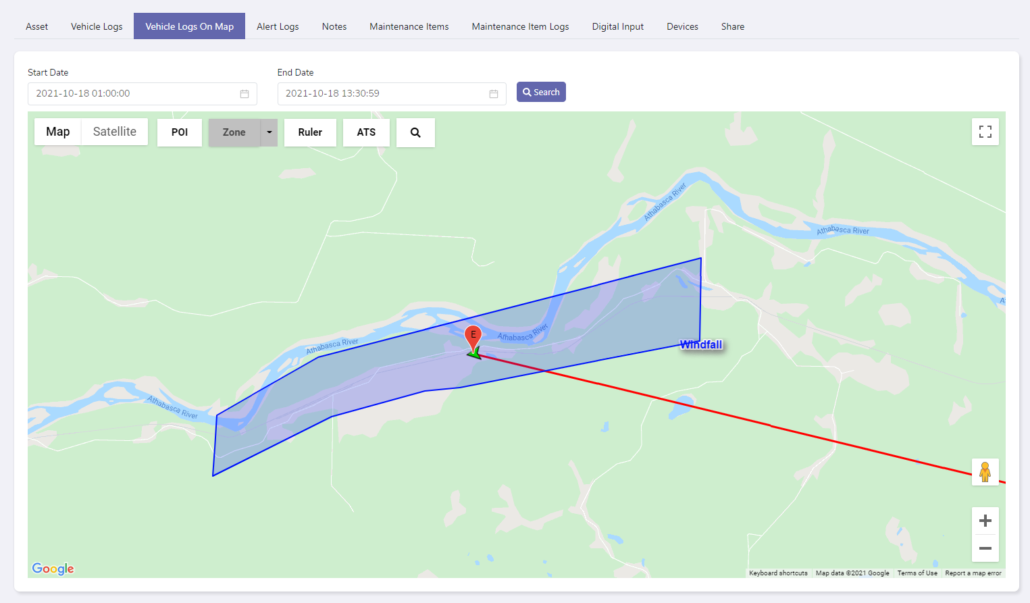 GPS tracking with the right tracker can help with that scenario, but the problem is that rail cars don’t have batteries, and GPS trackers need a power source. Some GPS trackers come with large long-lasting batteries that will last for years, but this typically only provides one report a day. That simply would not solve the problem. At MAXtrax, we did use a GPS tracker with a large long lasting internal battery and rugged design to solve the problem, but we customized the programming of the device to give standard general the reporting they wanted. This type of customized reporting allowed us to set up the device so that it reported more frequently but still allowed the device to conserve more battery life, allowing it to last the entire season. Rail cars equipped with the trackers report at a precise, calculated and preset rate to provide enough advance notification as they travel through GEO zones, so alerts are triggered far enough in advance. Both emails and SMS messages are sent to let the crews know the estimated time of arrival. They then proceed to the yard to load or offload them. This ultimately creates more efficiency for Standard General, reducing worker hours spent waiting for trains to arrive.

Fill in the information for your new seller.

Please note that duplicate emails are not allowed to register.